The Rise of Fijiana 7s

Exactly a year ago a group of young women were putting their name in the history books as they competed for Fiji in the Olympic Games in Tokyo. They won hearts and fans in Fiji and around the world with their performance.

Rugby being the sport of the nation for Fiji anyone that wears the white jumper is followed and gets put under the microscope with the hard and sometimes unforgiving Fijian fans. For years women rugby players have been trying to emulate what their male counterparts have achieved on the international stage particularly in 7’s as the Fijian Men’s 7s team have been on the top of the sevens competition for a long time.

At the end of the Olympics 7’s competition these group of women along with their coaching and management team proved to the world just what they were made of despite the struggles of being in isolation and the lack of resources and support. Though they eventually won Bronze Medal what they achieved from their performance was worth more than the medal. 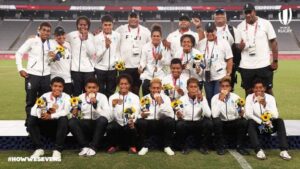 Fast forward one year to the Birmingham 2022 Commonwealth Games with a few from the Olympic Bronze winning team along with a few new inclusions Fijiana 7s were once again playing to get on the podium. At the  2018 Commonwealth Games they were able to finish the competition at fifth place.

It was a massive weekend of Fijiana finishing the competition by winning Silver. From fifth to second and Silver their performance confirmed that they are now a force to be reckoned with and are not simply making up the numbers. 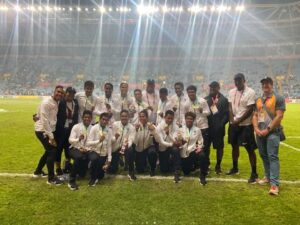 Congratulations on the Silver Medal Fijiana.

The next assignment is the World Cup in Cape Town. All the best with preparations. We cannot wait to cheer you ladies on.

PC; How we sevens, FASANOC

ADELE IS SURPRISED BY HER SCHOOL ENGLISH TEACHER