WOMAN WITH THE WORLDS LONGEST NAILS

Diana Armstrong has been growing her nails for 25 years, and  has not visited  a salon for 22 years.

Diana, who last cut her nails in 1997, vowed never to cut her nails again after her 16-year-old Latisha tragically passed away in her sleep from an asthma attack. Her daughter was the last person to do her nails for her. Although her other children tried to persuade her to get them manicured, once they understood the significance, they left her to it. 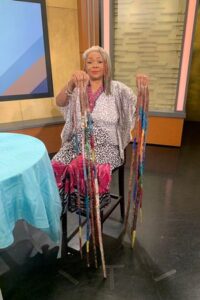 Talking about her daily routines she says that  she can Zip up her  pants or jacket she can pop open a can of soda but she needs a knife. She used to drive her own car but had to stick her hand out the window, so she doesn’t  drive anymore.

“And in public restrooms, she  needs to use the biggest stall – because her nails are usually longer than the regular-sized stalls.”

She added: “Each nail takes about 10 hours to file and polish. To file them, I need to use a Dremel woodwork tool. I get them done every four to five years, and get through between 15 and 20 bottles of polish. I painted them last week and it took four days.

Counting Penguins as a job?!