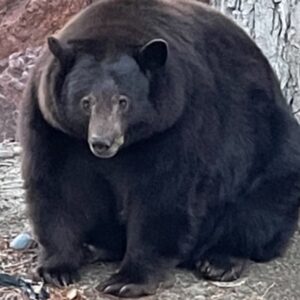 Imagine having a hungry bear on the loose in your neighbourhood.

Knowing me i would hightail it out of there straight away i mean a (227kg) bear on the loose mmhmm I’m definitely changing neighbourhoods.

So apparently a massive black bear that has been nicknamed by the California police as “Hank the Tank” is on the loose breaking into dozens of homes in Lake Tahoe since last summer.

The bear burglar weighs 500lbs (227kg), much more than the average bear, and appears to have skipped hibernation in winter due to a constant food supply.

Authorities say euthanisation may be necessary because the wild animal has grown so comfortable around humans.

Wildlife groups are calling for him to be relocated to a sanctuary.

Hank earned his nickname by hungrily barging his way into locked and occupied homes.

“It’s learned to use its size and strength to force its way into homes,” says California Department of Fish and Wildlife spokesman Peter Tira. “It’ll barge through garage doors, it’ll barge through front doors. It’ll go through windows.”

The Bear League, a local wildlife advocacy group, says that Hank got to be his size (black bears average around 100-300lbs) due to his raging appetite for human food.

They have called for Hank to be trapped and sent to a sanctuary instead of killed, and for Lake Tahoe residents to be more vigilant about securing their food and rubbish.